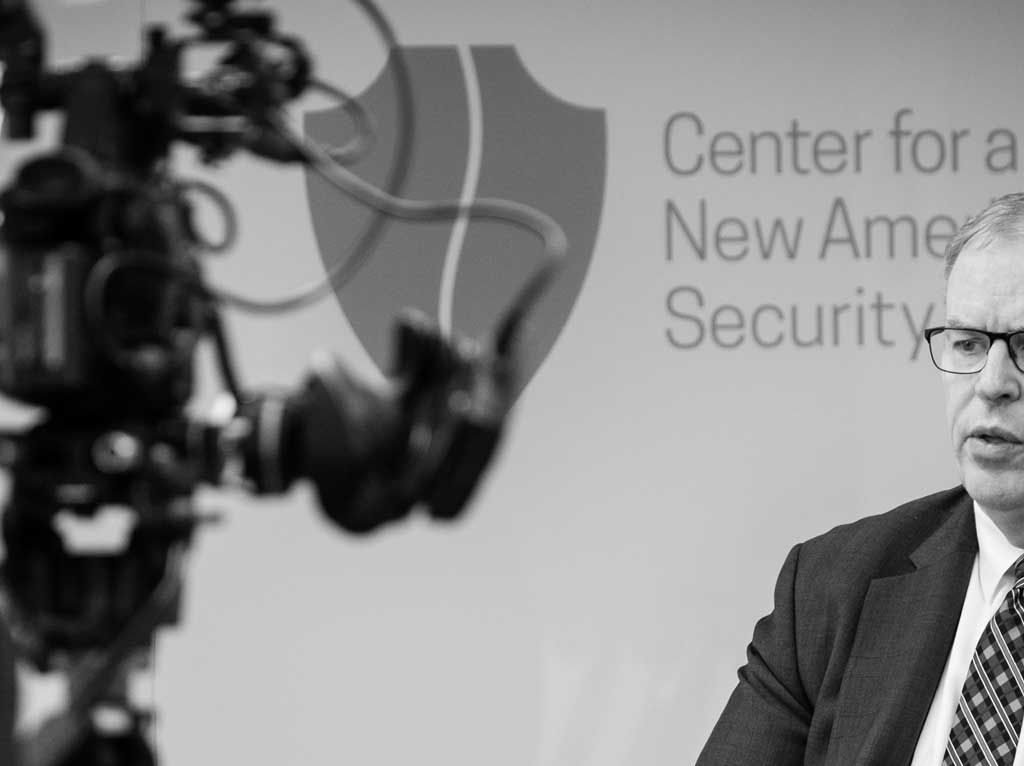 On October 4, 1957, the Soviet Union launched the first artificial satellite, dubbed Sputnik, into Earth’s orbit as the world watched in awe.

This metal sphere, only the size of a beach ball, ended up spurring a technological “space race” between two competing adversaries and created a tension that has lingered for decades.

The Sputnik launch also enormously impacted America’s national psyche — that another country could be the first to launch into space was unfathomable, and propelled the nation to compile a powerful response.

The government created NASA and assembled the best physicists, computer scientists, and engineers. Just over a decade later, on July 20, 1969, two American astronauts landed Apollo 11 on the moon.

The race was won.

The Next Space Race

Robert O. Work, who was the Deputy Secretary for the Department of Defense from 2014 to 2017, believes it is time for another national mobilization — this time, for AI capabilities.

“I think we have to recognize that artificial intelligence, machine learning, and the autonomous operations they enable will likely lead to a new industrial revolution and an accompanying military-technical revolution,” he said. “AI and autonomy are going to have a determinative impact on how competitive we are in both economic and military power in the future. It is not a technological competition we want to lag in.”

It is this belief that pushed Secretary Robert Work to champion the Third Offset Strategy at his time with the Department of Defense.

Offset strategies, like their name suggests, seek to “offset” a potential adversary’s advantages, such as numerical superiority, in order to create a decisive warfighting edge.

A successful offset strategy serves as both a deterrent to rival nations that might otherwise instigate conflict and a means of ensuring victory if conflict does break out.

This approach has been critical to U.S. military strategy since World War II. But the effectiveness of America’s Second Offset Strategy, which focused on battle networks and guided munitions, has waned as other nations have acquired these same technologies.

Secretary Work argues that the time has come for a new offset strategy. He advocated founding the Defense Innovation Initiative dedicated to working on the Third Offset Strategy and guided its development and growth.

As suggested by the prestigious Defense Science Board, the strategy emphasized the pursuit of AI and system autonomy as the best way to create new strategic advantages for the United States.

The thinking behind the Third Offset is that by injecting AI, machine learning, and more autonomous systems and operations into our grids, it will result in more timely and relevant decisions, a faster translation of decisions into actions, and the application of more discriminate and rapid effects in the conduct of a campaign, all while risking fewer forces and personnel.

In essence, exploiting AI and autonomy should help the U.S. Military to outperform an enemy because the enemy will always be behind. It will be responding to decisions that you’ve already discarded.

“AI and autonomy are thus essential to our maintaining a comfortable overmatch against potential great power adversaries,” he continued. “Companies like SparkCognition are at the forefront of this. They’re trying to think of how we can gain that advantage by using AI in specific applications and operations.”

Secretary Work continues to advocate for AI research in his role as co-chair of the Task Force on Artificial Intelligence and National Security at the Center for a New American Security (CNAS).

He argued that we are in “a very, very sharp technological competition with a lot of components, with AI and autonomy being one of the central pillars of that competition.”

China has clear goals to be technologically dominant in AI by 2030 and has hundreds of billions of dollars in funding committed to achieving these goals. Secretary Work notes that the United States is still working to articulate a plan and that the current national response to AI is insufficient.

“Do we have the capability to compete with China? Absolutely. It’s just going to require focus and investment,” he said.

He outlined three steps the United States needs to take to stay on top:

2) ramp up investment in research and development

3) facilitate public-private partnerships to ensure the development and application of cutting-edge technology.

One of the key responses to Sputnik was forming NASA.

While recent progress by the White House to form the Select Committee on Artificial Intelligence is promising, Secretary Work believes the administration should establish a new U.S. agency that shapes and invests in the development of AI capabilities in the same way that NASA did for the space race.

Michael Griffin, the Under Secretary of Defense for Research and Engineering, has also mentioned forming a joint office on artificial intelligence for defense prototypes.

“The administration has emphasized AI as a priority, particularly in terms of providing funding for R&D, removing barriers to AI innovation, preparing the workforce, and exploring military and government uses,” explained Secretary Work. “Organizing the task force is an important first step, and I think fleshing out a central agency would ensure we remain leaders in AI development in the decades ahead.”

A national AI agency would spend time breaking down barriers to public-private partnerships and focus on how to employ government capital in both private and public sectors to ensure that all bases are covered in AI.

It would also develop strategies designed to maintain forward momentum towards goals even when setbacks occur.

“There will be cases where AI causes an accident either because it was spoofed or because the coding was bad,” Secretary Work cautioned. “That’s why it’s going to take leadership from the top. It’s going to take the President and Congress and the Department of Defense saying that despite setbacks, we have to go after these technologies in a deliberate manner.”

He imagines a national AI Reserve Officer Training Corps, providing scholarships in areas like machine learning, data analytics, and data visualizations in exchange for a monthly commitment to consult for the military upon graduation.

Given Secretary Work’s influence on the Third Offset Strategy, it should come as no surprise that he has an interest in military automation injected with AI.

He thinks an AI center of excellence could help direct AI research and development and establish capabilities across the four services. Secretary Work explains that eventually, such a center may no longer be necessary — that each military service will build up their own AI expertise because it will become so fundamental to do what they do.

However, during the critical initial phase, the center will help the services envision how AI could assist them.

In addition to allowing the Joint Force to operate at a faster tempo than its adversaries, he also sees AI enabling new forms of human-machine teaming and unmanned autonomous operations.

He hopes that automation on the battlefield will have the additional benefit of increasing humans’ trust in machines. Over time, this may see a Joint Force with a greater percentage of unmanned and robotic systems — for example, one manned tank with smaller unmanned combat vehicles, or one manned airplane controlling three drones.

Secretary Work acknowledges that there are concerns about autonomous weapons.

“We have automated weapons right now,” he explained. “These ‘fire and forget’ weapons are always directed at a specific target or type of target. The operator designates the target and launches the weapon, which homes in on the target all by itself and blows it up. The next stage will see weapons with improved narrow AI guidance systems that can make up their own courses of action and select among the best to achieve the desired target effect.”

“It will also allow collaborative attacks among different weapons and ultimately swarm-type attacks,” He continued “These systems will be capable of increasingly sophisticated autonomous attacks against targets — but these targets will always be designed by humans.”

R&D will need to undertake the arduous process of looking at the entire landscape of technologies contributing to AI and autonomous systems in a fast-changing field.

But, where to invest is critical. Work said, “I think where we could go wrong is if we continue to buy a lot of old legacy type platforms and don’t invest more heavily in these high technology areas that are going to determine who has the technological advantage on a future battlefield.”

(Watch: Robert Work on why many fears about AI are unfounded)

One of the major differentiators between the United States and China is the collaboration efforts between the government and private corporations (in fact, China refers to their strategy as civil-military fusion).

Secretary Work believes that establishing such partnerships in the United States will require leadership from the White House, Congress, and the proposed central AI agency.

This would allow problems to be addressed in a manner such that more commercial companies feel comfortable working hand in hand with the government.

“We need ways to address the real and valid concerns some commercial companies have with working with the government,” said Secretary Robert Work. “Making sure that their intellectual property is protected. That they have a level playing field to compete. All of these things require a coherent and deliberate national plan.”

Work feels we must also improve speed to market. In a field where technology is making marked progress every two months, the five-year acquisition cycle typical for defense is not practical.

The Department of Defense began testing shortened timelines with the Defense Innovation Unit, Experimental (DIUx). The organization initially sought out companies in Silicon Valley, promising the DoD will work with them to make things happen faster.

Secretary Work further explains that the DoD had to reboot the program in order to work within private companies’ expected timelines.

Adapting to an AI Future

The department is now looking to facilitate public-private partnerships by easing other bureaucratic burdens like security clearance and contractual mechanisms.

For input on how the government can successfully partner with private business, Secretary Work has often turned to fellow member of the CNAS task force, technologist, entrepreneur, and author, Amir Husain.

“Amir, to me, is one of the thought leaders in this space,” said Secretary Work. “While he looks creatively at specific programs that the DoD can address with AI, he also frankly identifies how the DoD impedes the processes to solve them. He can actually pinpoint what is holding us back.”

Secretary Work acknowledges that AI has additional hurdles to overcome amongst the general public.

“There’s a lot of uncertainty on how we should approach AI, and that’s natural in a democracy. We should have these debates,” he said. “When arguing the merits or dangers of AI, you can either have a hopeful view of how AI will help society and help us solve problems or you can have an extremely negative view that may foreclose many opportunities. Seeing how AI is already positively impacting our lives, I have a hopeful view.”

While it is unlikely that U.S. AI goals will be as tangible as putting two men on the moon within a decade, Secretary Robert Work does think we are at a critical juncture in this technological competition.

“The Chinese national AI plan is quite straightforward,” he said. “It says we’re first going to catch the Americans, then surpass them, and then lead the world in AI technologies. It is a direct challenge to U.S. economic and military competitiveness.”

“The Chinese AI plan is a Sputnik moment for me,” he continued. “In the past, such a direct challenge to U.S. technological prowess will be met with a vigorous response. We haven’t seen one yet. I hope we see one soon.”

Next Article8 Most Ridiculous Connected Devices