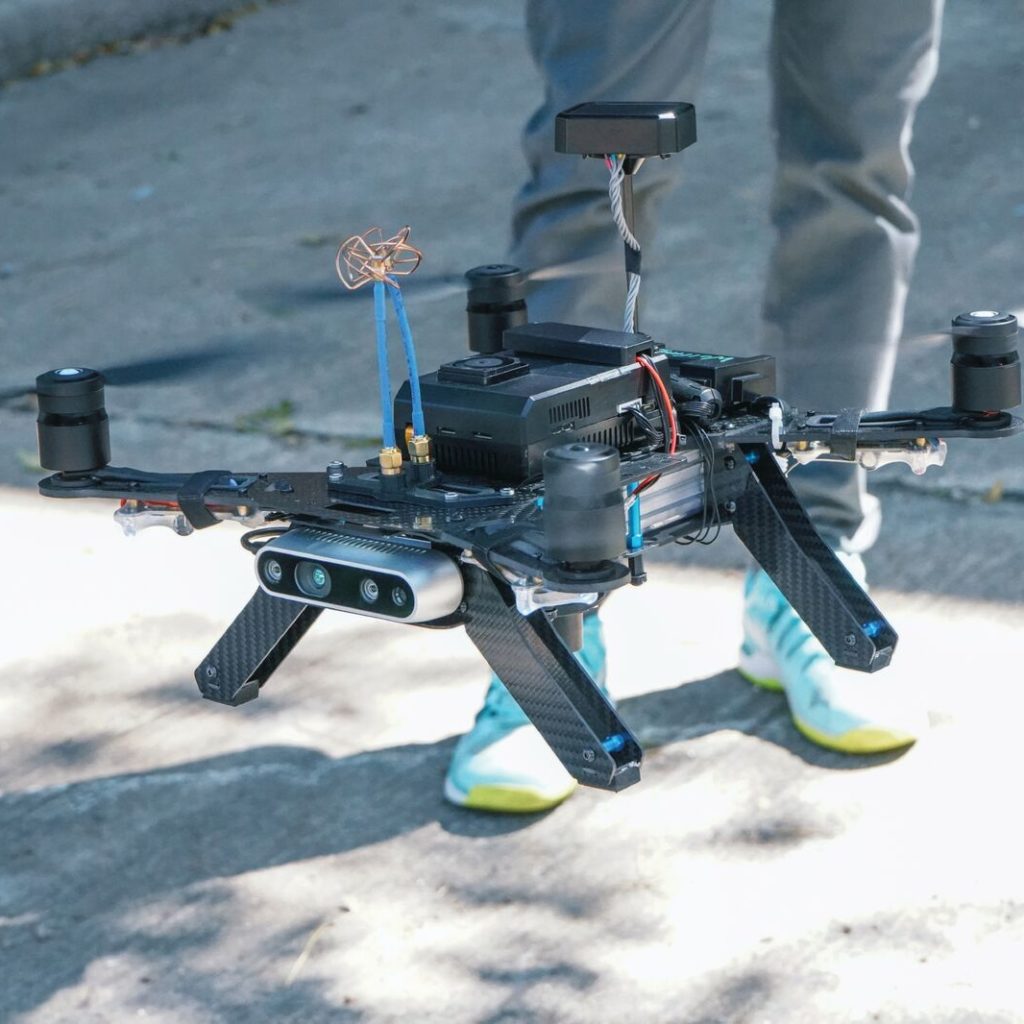 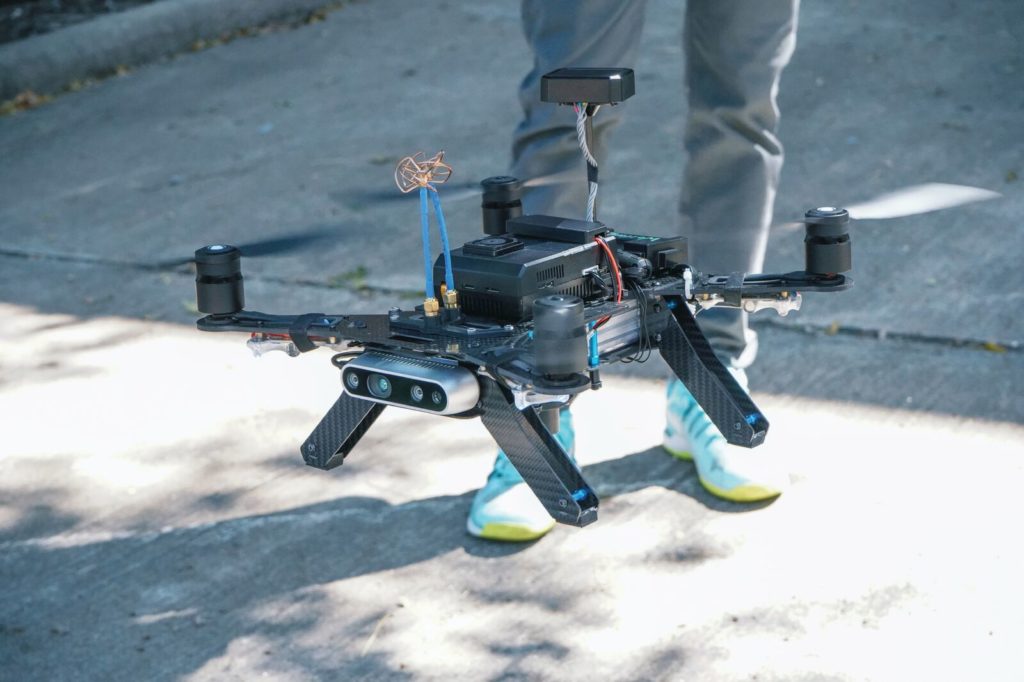 Most people are familiar with unmanned aerial vehicles (UAVs), more commonly known as drones, for tasks like taking aerial pictures or delivering mail. However, these days UAVs are also used to save lives. When Hurricane Harvey devastated Houston and rising water shut down streets and highways, drones played an essential part in surveying flooded areas to assess damage and determine if levees would hold. They also identify people in need of help, and when ground-based rescue is too dangerous, drones can deliver supplies like life jackets and ropes.

Despite this life-saving capacity, UAVs remain rare in such public service uses. In addition to budget concerns, most drones require a skilled human controller to pilot them per FAA regulations, and first response teams lack trained staff. If drones are to become practical in areas like search and rescue or disaster response, they need to be highly autonomous. In other words, they’ll need to fly themselves.

SparkCognition’s experimental unit SparkLabs has been applying advances in AI and machine learning to research and develop autonomous drones. The team shared their progress of designing, building, and testing an autonomous UAV. Ultimately, SparkLabs hopes to build an autonomous drone fleet capable of aiding first responders during the most challenging missions. 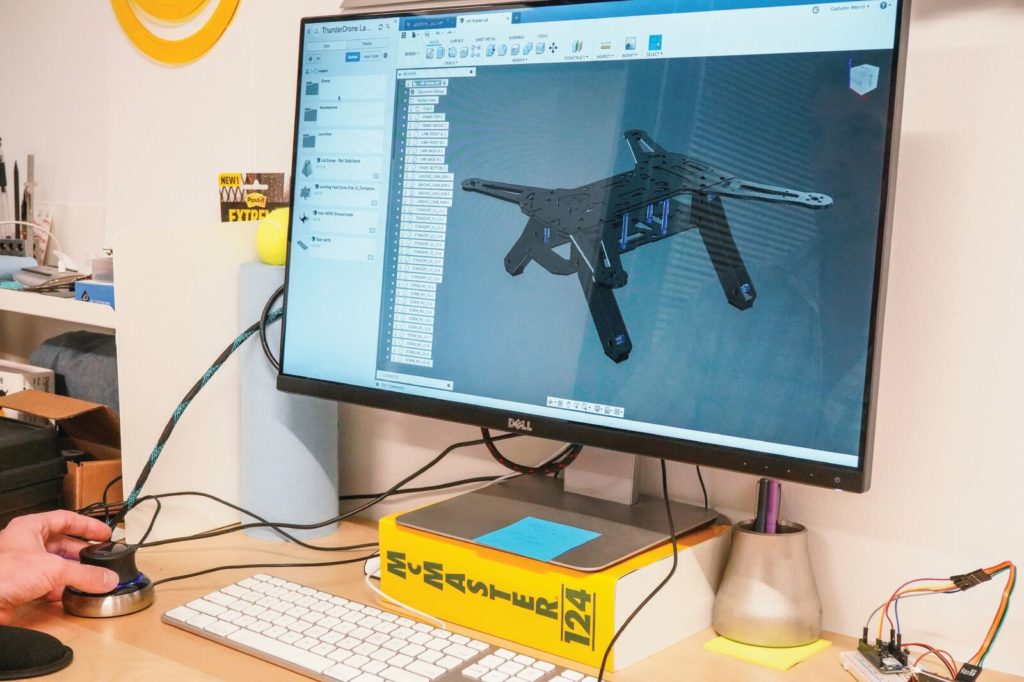 The first step of any UAV building process is CAD, which stands for computer-aided design. CAD helps the engineers identify the proper components for the drone and optimize them to ensure flight readiness. Here, the team is customizing the carbon fiber body of the UAV so it can hold all of the necessary electronics to fly autonomously. 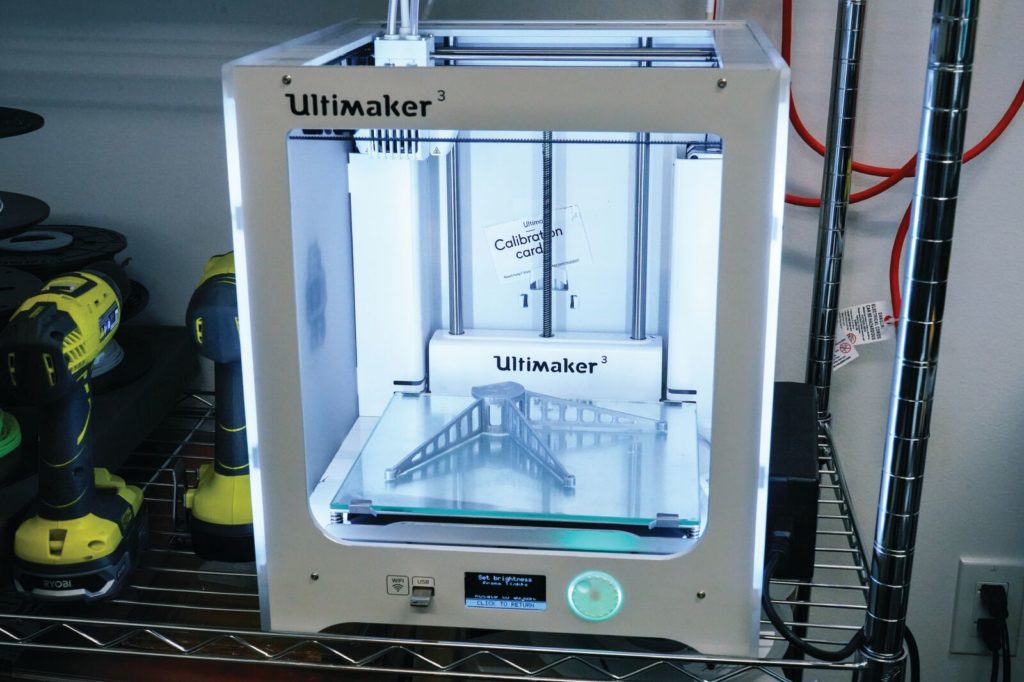 With the design finalized, the team compiles the necessary components. While most of the necessary electronics—the sensors, cameras, and processors, for example—are purchased pre-built, other components must be created in the lab. The team uses a 3D printer to make customized brackets and casings to hold onboard devices and wires. A key challenge in this process is making parts that are compact and light enough for the drone to remain aerodynamic, but also strong enough to hold and protect delicate electronics. 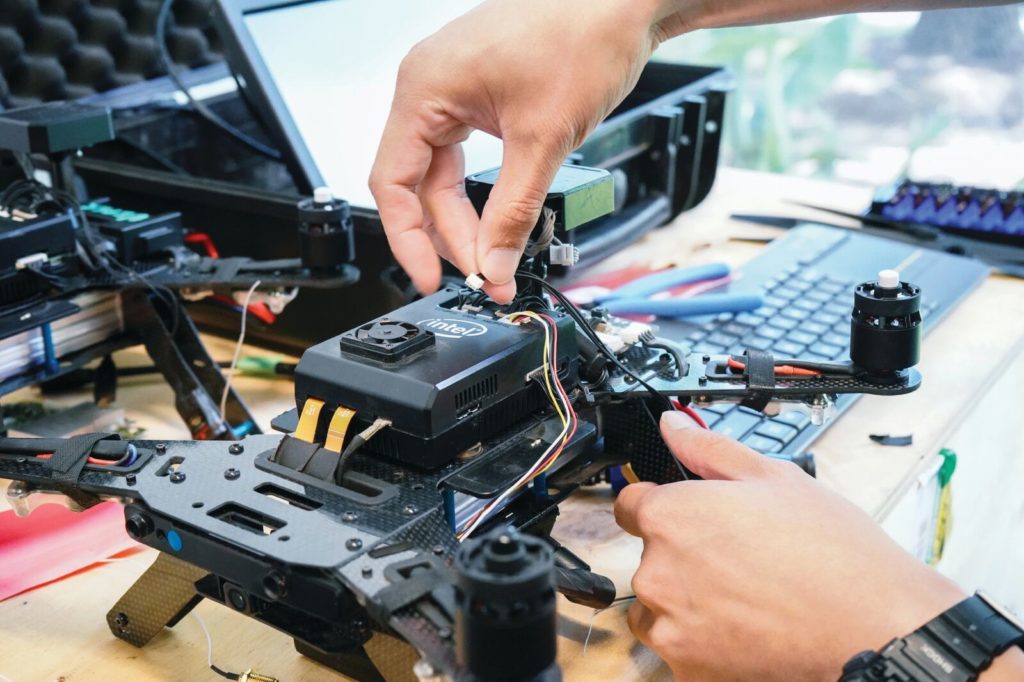 With the components assembled, it’s time to build the UAV. First, key parts are fastened around the drone’s body in the custom-built casings, including its battery, propellers, sensors, antennas, and processors. Then, an intricate network of wires is installed, linking the components together for data and power connections. Assembly is a delicate and painstaking process, much of which must be done by hand. 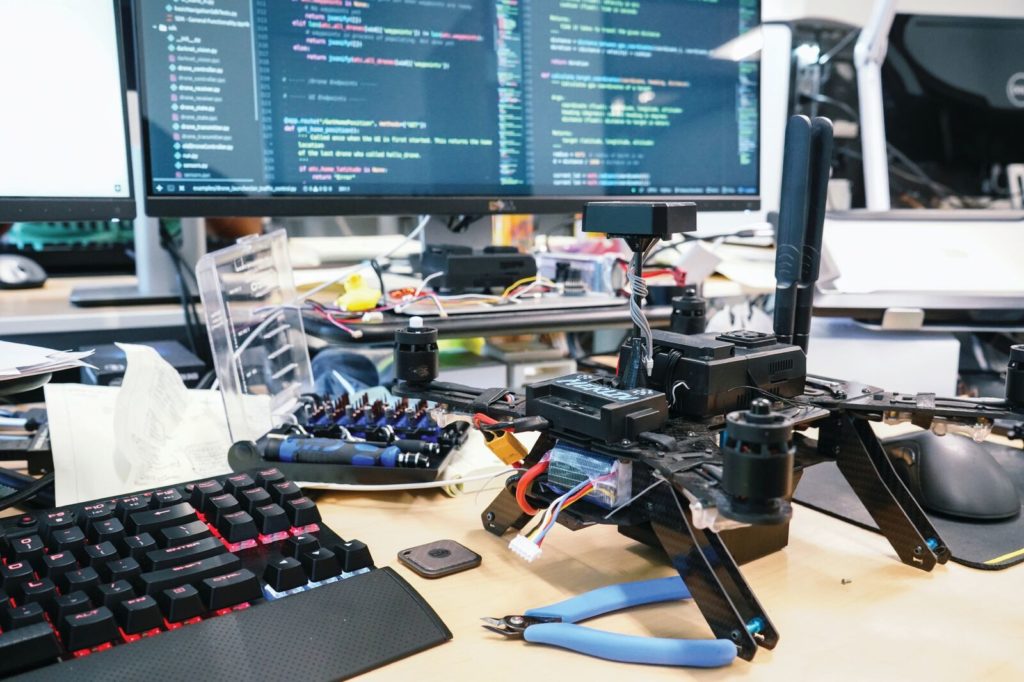 After the drone is assembled, it must be programmed to fly properly. Sensor data from onboard accelerometers, tilt sensors, distance sensors, and other devices are fed into algorithms that help control the drone’s motion during flight. Next, machine learning algorithms are added to help the drone “learn” how to fly itself to accomplish its mission. In addition to ease of use for the responders, drones have the potential to be more precise when flying autonomously, thanks to input from the sensors. 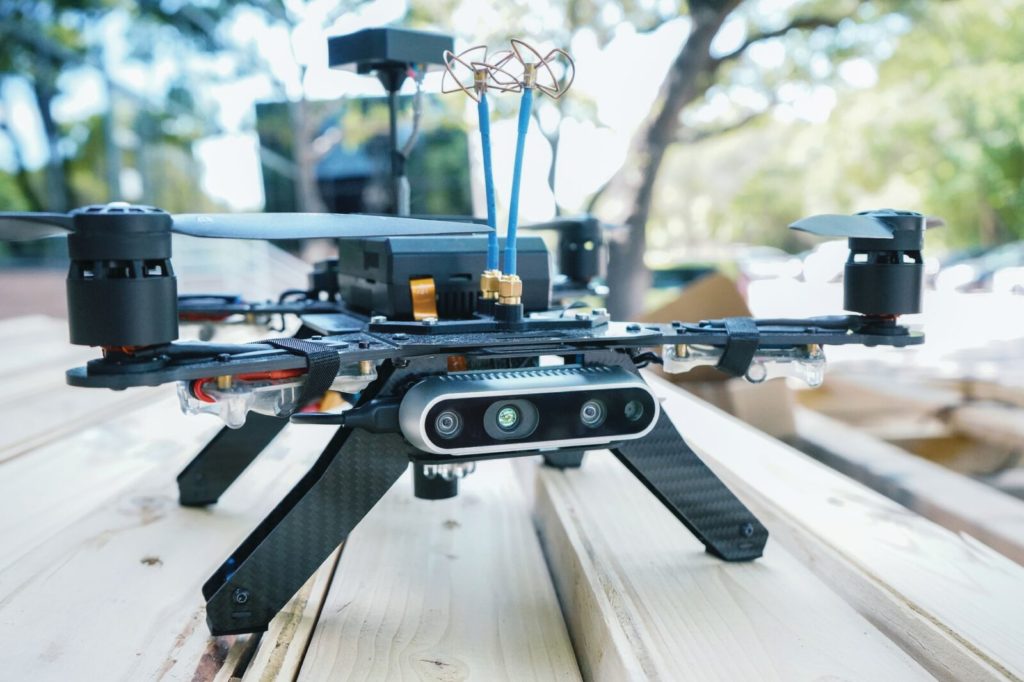 In preparation for the test flight, the team conducts quality assurance trials to ensure all the UAV’s electronics are functional. The drone will be using real-time image data coming from four cameras on its body to navigate itself towards a landing pad. If all goes to plan, the drone will take off from a random location nearby, search for the landing pad, and land itself safely and accurately in its center. 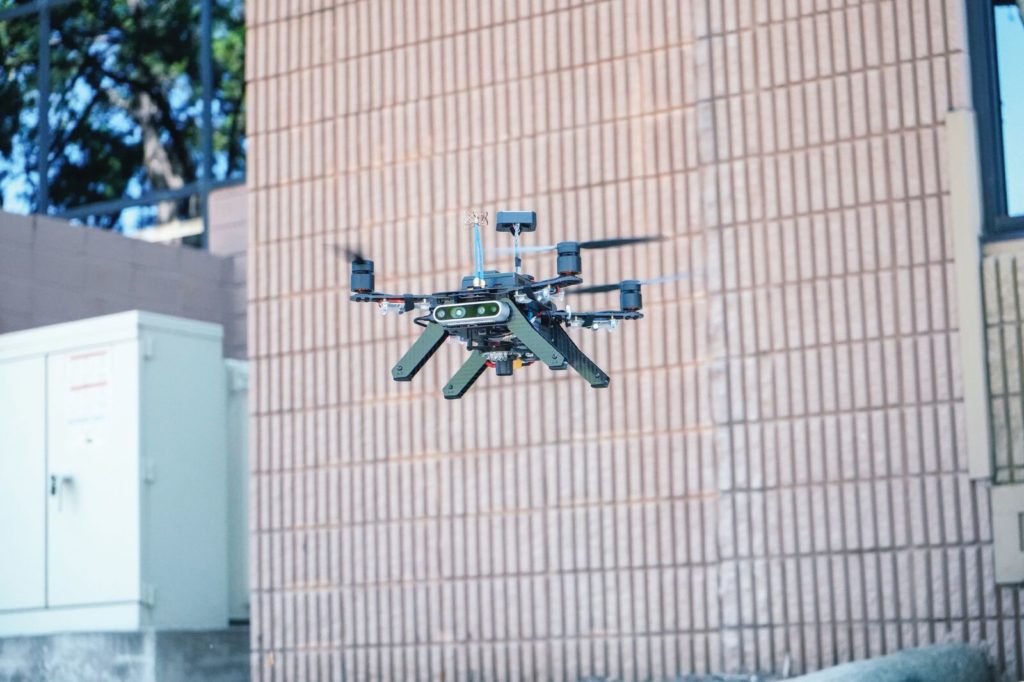 Liftoff! For a moment, the UAV seems unsteady, as though it were trying to find its balance. In a matter of seconds, though, the drone’s internal algorithms take control, using the data coming into the drone’s sensors to determine the right rotor speed and angle to achieve stability. 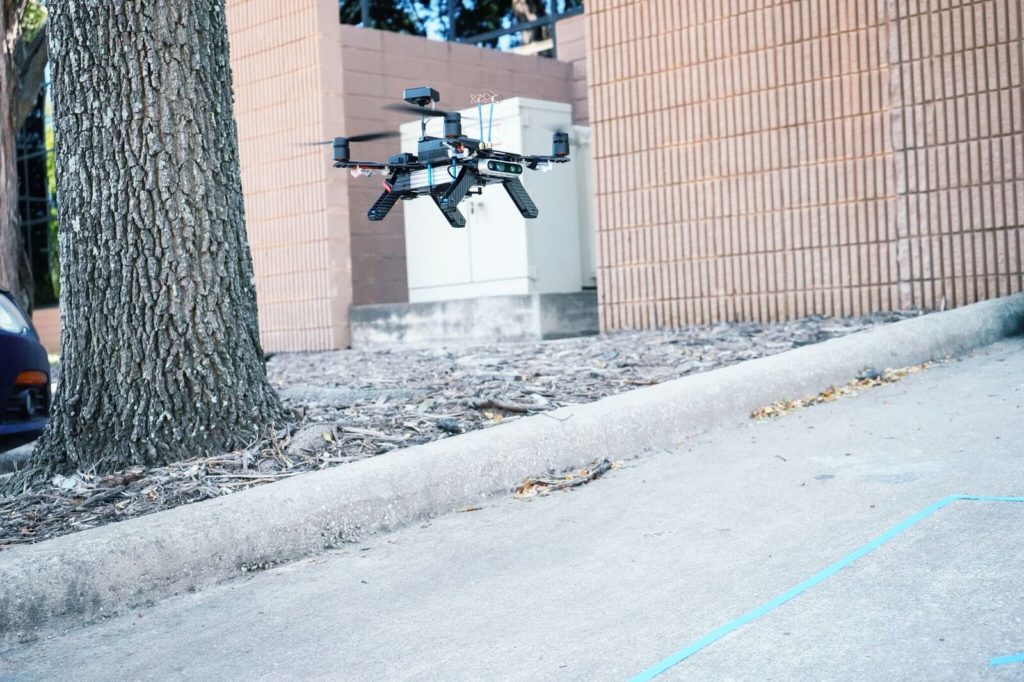 The drone begins a slow spin about its vertical axis, its cameras collecting hundreds of image frames per second in search of its target. It comes to a stop, facing the direction of the blue box. 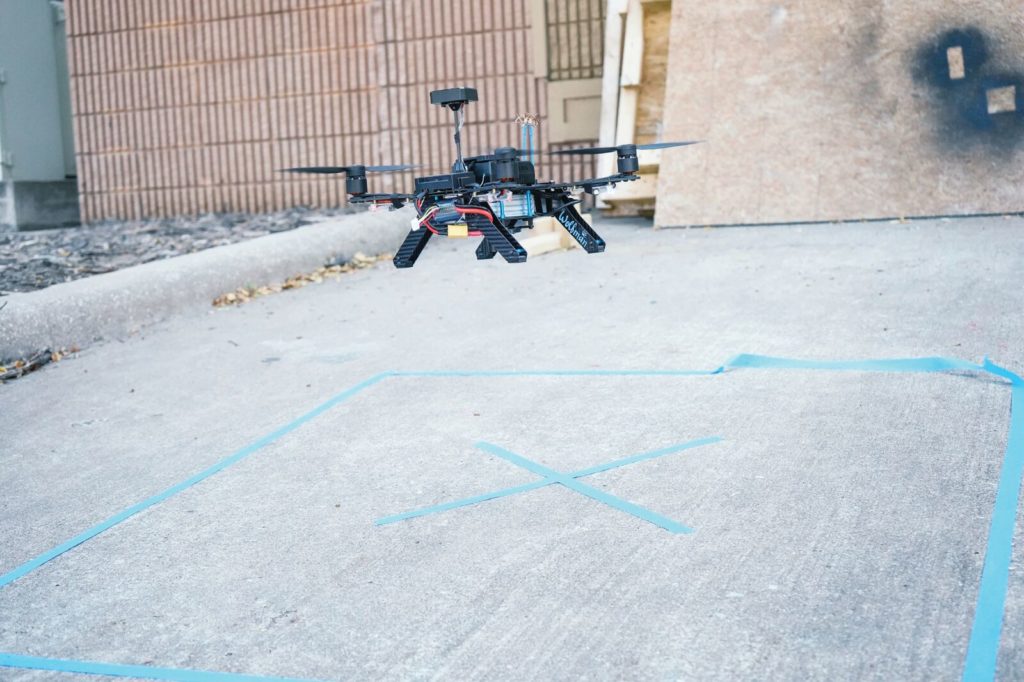 Slowly but surely, the UAV drifts towards to the center of the pad. Once directly above the center, it begins its vertical descent. 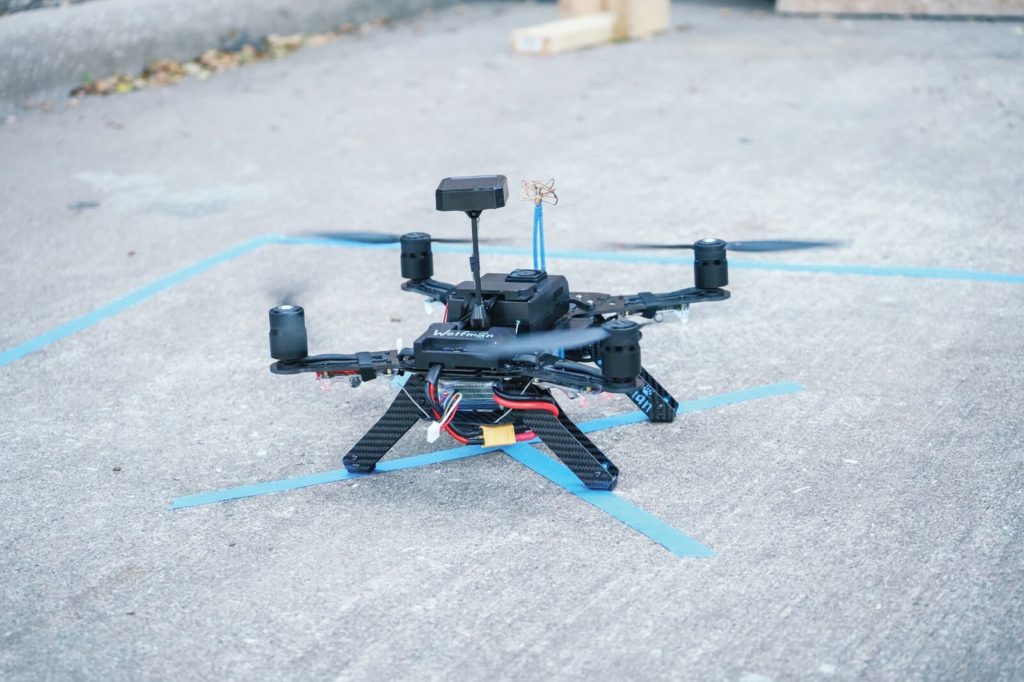 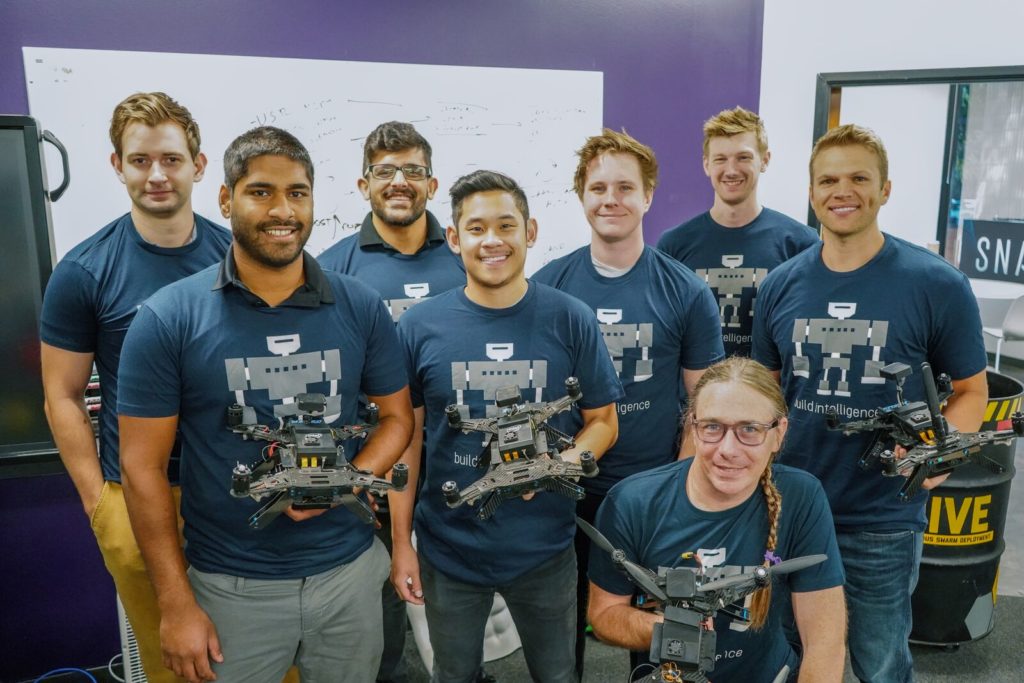 While landing on a small blue target may seem like a small achievement at first glance, it speaks volumes about the future of autonomous drones. Imagine the small blue target is a person trapped on a rooftop after a hurricane that human responders can’t locate or reach.

Engineering challenges remain, such as weather-proofing drones so they can fly in rain, heavy wind, and other harsh conditions of emergency situations while avoiding obstacles like trees or power lines. As these technologies develop, they have the potential to turn AI into a beacon of hope for those in need. 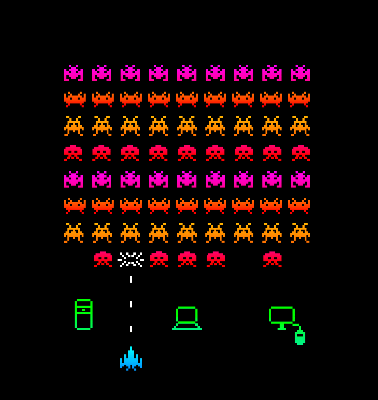