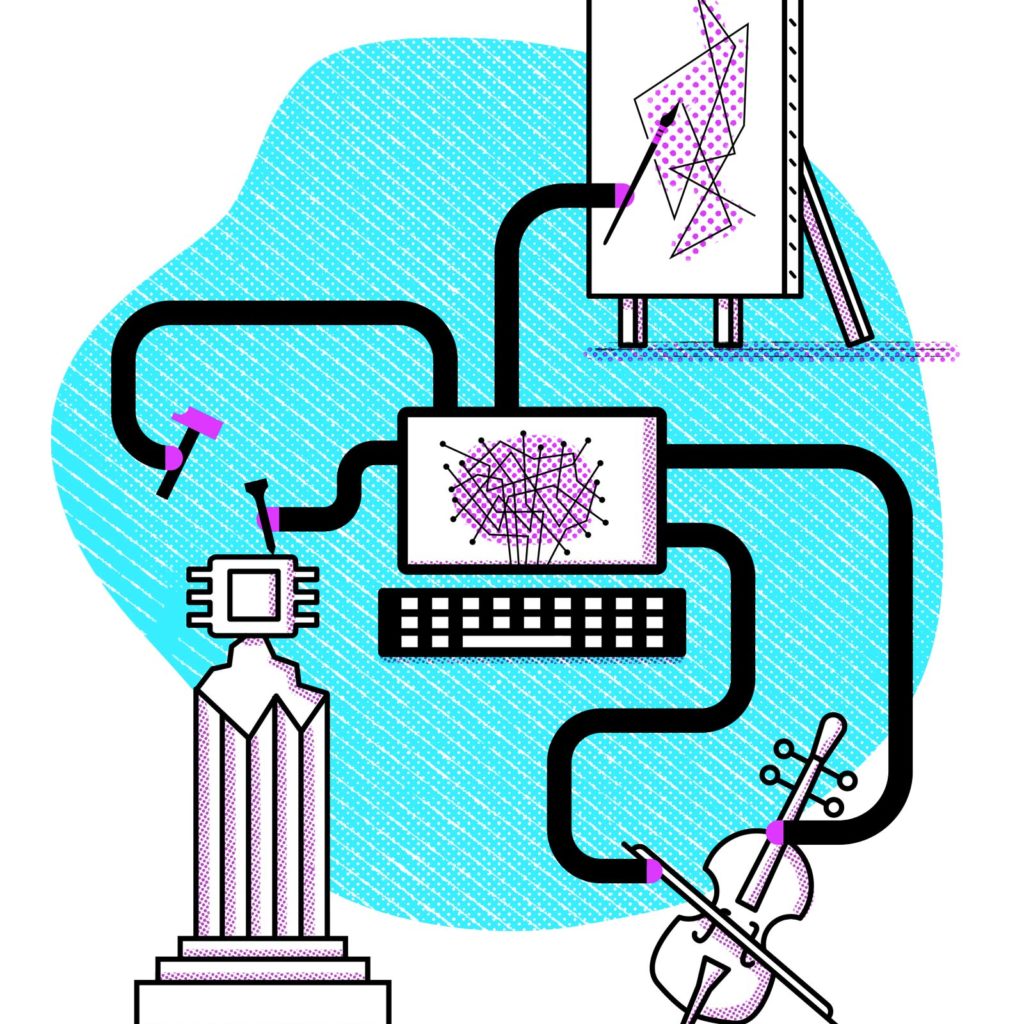 Art and science have always enjoyed a long and robust conversation, and today is no exception. Consider scientist James Clerk Maxwell, who invented the first color photograph in 1855 while he was transforming the world with his theory of electromagnetism. Gottfried Wilhelm Leibniz, a composer and mathematician who invented calculus, famously said, “Music is the pleasure the human mind experiences from counting without being aware that it is counting.”

Where is the locus of art and science today?

I see art as the navigation of potential—how the world could be, in a song, an image, a sculpture. But today, we are moving away from physical objects towards more etheralized software-based experiences.

The internet has permeated the everyday activities of much of the world’s population in just over 30 years. Think of the vast array of artistic, logistical, technical, and financial modalities that it has unleashed. For most of the world’s population, the internet arrives on their phones, which, according to a study by Deloitte, Americans check over eight billion times a day. That’s a lot of data.

(Pythagoras had an idea called the Harmony of Spheres in which information would be conveyed in the space between things. I love to see how this philosophical intrigue has played out in the rectangular objects we all hold in our hands.)

Contemporary global culture has slipped further and further into a data-driven milieu. Social media has become an echo chamber, amplifying “news” that may have been created as satire. Sophisticated AI technology can create deep fake videos, where a subject appears to perform actions on video that is virtually indistinguishable from real. Data has blurred the lines between how art and real life overlap, and our society has reached a point in which a former reality TV star-turned-president proclaimed, “What you’re seeing and reading is not what’s happening.”

There has been a shift from a physical to digital frame of reference for everyday life in the 21st century. “Reality” itself becomes elusive and problematic in a world where the term “fake news” is an algorithm disguised as a political belief or ideology. As we navigate the ambiguous edges between morality and ethics applied to the world of big data, the magnitude of the shift is something to keep in mind.

Think about how much data is being expended with each keystroke. When Google started in 1998 in a garage in Menlo Park, the average person barely searched for anything. By 2006, the world averaged over 100 million Google searches every day, which most people thought was an incredible amount at the time. Now, in 2018, the average amount of Google searches hovers around 4.5 billion a day—a factor of 45 times more—which is a metaphor scripted in data of just how deep down the rabbit hole the digital revolution has taken us as it becomes part of our daily life.

The real revolution isn’t happening in internet search, apps, or media. It’s in data. And like when artists started using linear perspective to give the illusion of depth and space to painting, artificial intelligence can be the tool to navigate this new reality.

I have used climate data from Antarctica to algorithmically generate musical patterns. David McCandless founded a blog called Information is Beautiful where he takes data (from movies to humanitarian issues) and plots it into interactive visualizations. He has stated he does this both to produce something aesthetically appealing and to help people understand the world.

In this same vein, data scientists are using algorithms to create art as well. By training on sci-fi films, a neural network that named itself Benjamin wrote a screenplay called “Sunspring.” Christie’s is auctioning a work of art created by an algorithm that trained on 15,000 portraits painted between the 14th and 20th centuries.

We make new tools and use new ways of thinking to measure the powerful phenomena we explore everyday life in a data-driven society. Update the tools and metadata and you have the creative economy we have today.

Artists have always used new tools to create new perspectives—in fact, Albert Einstein wrote, “The greatest scientists are artists as well.” We can just say this is the beginning of a different kind of conversation.

Previous ArticleA League of Their Own

Next ArticleAutonomy in the Sky