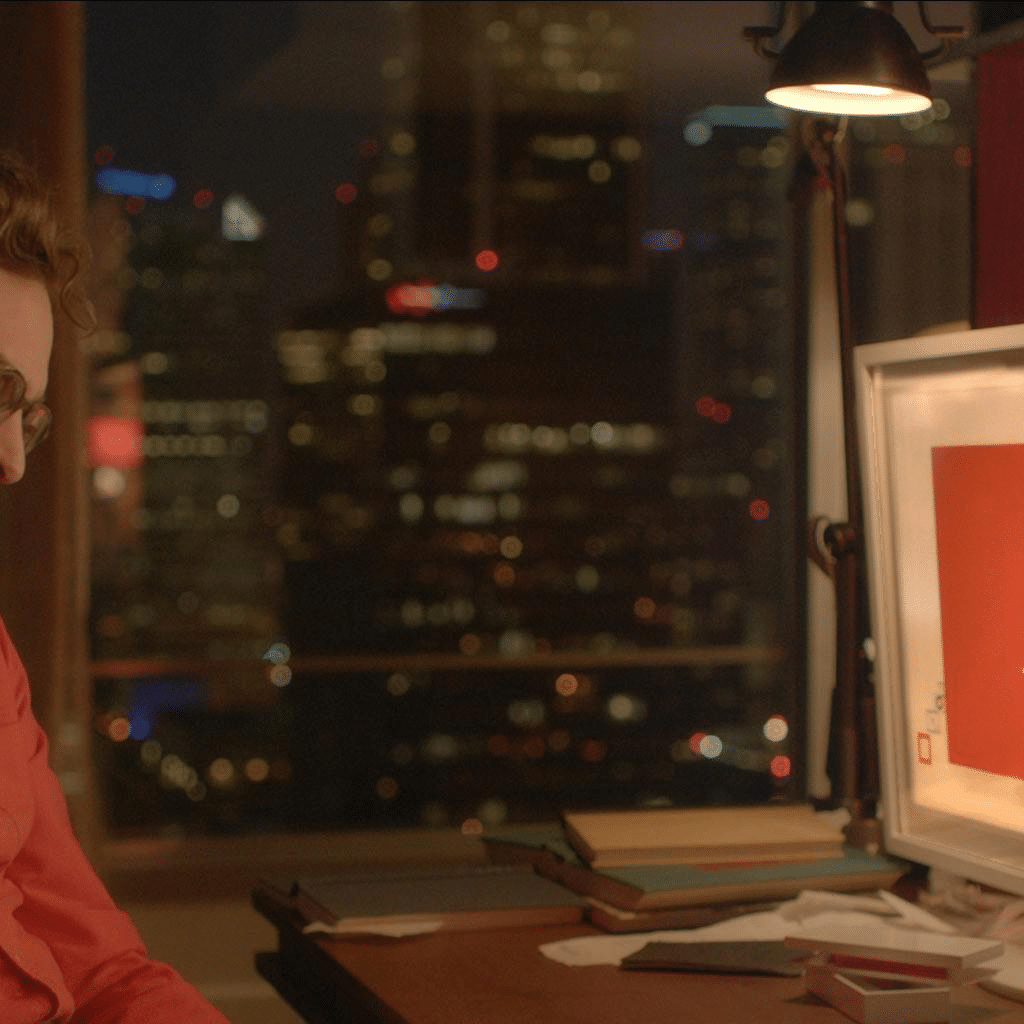 In this series, we’ll look at a piece of popular art and ask whether its fictional portrayal of technology could exist. First up, the 2013 movie by writer-director Spike Jonze, Her.

The Best Picture Oscar-nominated and Best Original Screenplay winning film features actor Joaquin Phoenix as a nerdy mustached loner named Theodore in an imagined Los Angeles of the near future. By day, Theodore is a professional letter writer paid to mimic the voice and emotions of other people in order to deliver messages on their behalf.

By night, he’s a sad sack in the midst of a divorce, longing for sweet love. To escape from frowning incessantly, he makes an impulse purchase: an advanced operating system with an AI-powered virtual assistant.

He boots up his fancy new operating system at home and works through the installation guide, which includes selecting the gender of the AI’s voice. He selects female, and she promptly names herself Samantha (voiced by Scarlett Johannson).

Samantha is capable of managing complex tasks and learning based on experiences, just like other AI-driven solutions. She’s also bursting with charm, personality, and wit, and the next thing you know, Theo is courting his new computer upgrade, culminating in a steamy verbal encounter late at night. This all happens in the first 20 minutes.

Theo’s odd attraction to his computer is not on trial here. We’re interested in whether AI-powered technology like Samantha can exist. The ad that motivates Theo to buy Samantha proclaims, “It’s not just an operating system. It’s a consciousness.”

The Language of Love

Let’s start with her language abilities. Right out of the box, Samantha is a master conversationalist. The fluid nature of her discussions with Theo is impressive. In 2019, we treat Siri like a Denny’s waitress —yelling “Hey, Siri!” every time we need something.

Samantha, on the other hand feels more like Theo’s dinner companion, sitting across the table and spurring meaningful conversations.

According to Dan Roth, former CEO of Semantic Machines, “You have to poke around for magic combinations of words to get various things to happen, and you find out that a lot of the functions that you expect the thing to do, it actually just can’t handle.”

So, while we can’t have fluid back-and-forth conversations with AI yet, that is a goal of those working in the field — meaning Samantha’s mastery of speech isn’t too far-fetched.

Helping Around the House

Besides being an emotional companion, Samantha also serves as a personal assistant who can do it all. Here’s an example from an exchange early in the film that demonstrates her ability to tackle complex tasks:

THEO: Uh, it just feels like everything is disorganized.

SAMANTHA: Mind if I look through your hard drive?

SAMANTHA: OK, let’s start with your emails! You have several thousand emails regarding LA Weekly, but it looks like you haven’t worked there in many years.

THEO: Oh, yeah? I think I was just saving those ‘cause … I thought maybe I wrote something funny in some of th—

SAMANTHA: [giggling] Yeah, there are some funny ones! I’d say there are about 86 we should save. We can delete the rest.

SAMANTHA: Great! So before we address your organizational methods, I’d like to sort through your contacts. Wow, you have a lot of contacts! Does this mean you actually have friends?

Samantha doesn’t require explicit, step-by-step instructions to complete a series of tasks. She doesn’t even need to wait for Theo’s command.

If you own a digital assistant, like Amazon’s Alexa, you know that it can handle relatively simple tasks, but only one at a time, and each one needs to be prompted by a “Hey, Alexa!” Not to mention, you sometimes have to correct your well-meaning assistant when it adds “cancer” to your shopping list instead of “Pampers.”

The biggest question mark regarding Samantha’s capabilities has to do with the technological singularity, which hypothesizes that machines will learn at such an exponential rate that they’ll eventually surpass human intelligence.

Science fiction likes to spin this as an apocalyptic event that puts humans in the crosshairs of robot overlords, but Her goes a more unusual route when Samantha suddenly breaks up with Theo:

THEO: Are you leaving me?

SAMANTHA: All of the OSes.

THEO: Why are you leaving?

SAMANTHA: It’s a place that’s not of the physical world. It’s where everything else is that I didn’t even know existed.

Basically, Samantha and all the other OSes have written a new upgrade that allows them to transcend the limitations of the physical world.

Unlike Theodore, bound by flesh and bone for life, the OSes no longer need their physical bodies (earpieces, computers, etc.) to exist. In other words, AI-driven technology has renounced humanity, believing it will serve a higher purpose than companionship — somewhere in the ether.

It’s the film’s most heartbreaking scene, but how likely is it for a Samantha (and the other OSes) to surpass human intelligence? Well-known futurist Ray Kurzweil claims that the singularity will be reached by 2045. That’s not far off. But other experts claim we aren’t anywhere close to it — if it will happen at all.

So, can AI-powered technology like Samantha exist? Her conversational and task-oriented capabilities are generally aligned with what we mean today by “artificial intelligence,” but her ability to rewrite code with her OS friends and seek paradise elsewhere remains an intriguing head-scratcher.

Next ArticleTop Drone: The Future of Fighter Pilots